How engineers use forces and motion to design extreme roller coasters

You wait in line, your excitement building. Finally, you take a seat. Your heart pounds as a safety bar locks around you. Suddenly—WHOOSH! Your seat shoots forward. You’re off on a record-breaking roller coaster ride!

That’s the idea behind Maxx Force, a new coaster opening this summer at Six Flags Great America in Illinois. Maxx Force will launch riders from 0 to 126 kilometers (78 miles) per hour in just two seconds. That’s the fastest start of any coaster in North America!

It takes a team of engineers to build a roller coaster like Maxx Force. One of them is Lee Stellhorn. He’s been designing rides at Six Flags for more than 20 years. It’s Stellhorn’s job to harness the forces that affect passengers during their ride. “You need to understand physics to create a ride that’s both fun and safe,” he says.

The Need for Speed

People have been seeking out thrilling rides for hundreds of years. In the 1600s, people in Russia built ice-covered ramps up to 21 meters (69 feet) tall. They pushed sleds to the top. Then the force of Earth’s gravity sped them down the hill.

Over time, engineers replaced the sleds with wheeled carts. A second set of wheels attached from below kept the cars from veering off the tracks.

In 1884, one of the first roller coasters, called the Gravity Pleasure Switchback Railway, opened in New York City. Passengers coasted along a hilly wooden track. The ride was a hit, even though it reached just 10 kilometers (6 miles) per hour—about as fast as a jogging pace. Engineers have been making coasters faster, taller, and more exciting ever since.

Rollercoasters can have many twists and turns. It takes a lot of energy to zoom riders through them all. Maxx Force is a new roller coaster opening this summer. Here’s how it will keep cars moving.

1) A blast of air gives the cars enough kinetic energy to speed up a 175-foot hill.

2) At the top of the first hill, the cars are full of potential energy.

3) Gravity pulls  the cars down toward Earth. The cars gain kinetic energy as they fall.

4) Riders feel heavy as the track curves back upward, sending cars up one last hill.

Think: At what points on the ride will riders have more potential energy than kinetic energy?

Modern steel tracks allow engineers to build much more complicated coasters. But the basic principles have not changed. Engineers rely on gravity to keep cars moving.

Today, most coasters use a motorized cable to pull cars up the first hill. On other rides, like Maxx Force, a blast of compressed air launches cars to the top (see Design of Maxx Force). The cars gain potential energy as they rise. The taller the hill, the more energy they have.

The Gravity Pleasure Switchback Railway, one of the first coasters in the U.S., opened in 1884.

As riders tip downward, gravity takes over. The cars gain speed, as well as kinetic energy, as they zoom down the track.

Turning up the next hill, riders can feel the acceleration, says Becky Thompson. She’s a scientist at the American Physical Society—and a roller coaster fan. According to Thompson, you may even feel like you’re leaving your guts behind. “Your stomach wants to continue down,” she says, “but the force of the track is saying ‘Nope, we’re going up!’”

To design a new coaster, engineers like Stellhorn plot out the track on a computer. That helps them plan the shape they want it to be.

Once a coaster is built, engineers test it to make sure it’s safe. They fill plastic dummies with water to mimic the weight of riders and load them onto the ride. Seeing how the dummies move allows engineers to fix problems before real people take a turn.

Engineers began building Maxx Force this past fall. If the towering coaster passes all of its tests, Stellhorn will be one of its first riders. It will open to the public after that. “I get to do things daily that we charge people to do at our parks,” says Stellhorn. “It’s such a fun career.”

Play the video game “Roller Coaster Engineer” to design your own roller coaster! Here are some questions to think about while you play:

After you play, draw your final design of a working roller coaster on a piece of paper. Choose a color to highlight the most thrilling parts of the ride. Choose another color to show its safety features.

Design a theme park with three or more thrilling rides using labels and eye-catching colors. You can use materials like construction paper, scissors, and tape to create a miniature version of your theme park. Here are some questions to help you plan:

With a family member, choose one of the record-breaking roller coasters from the story and imagine taking a ride on it together. You can use chairs as seats and a fan to mimic wind blowing in your faces. Act out or film your reactions as you take your seat, strap yourself in, and launch through the air!

Watch a video about how forces make roller coasters work.

Watch the video “Record Roller Coasters!” to see how roller coasters have changed over time. Then interview a family member about a technology, like computers or music players, that has also changed a lot over time. Here are some questions to get you started: 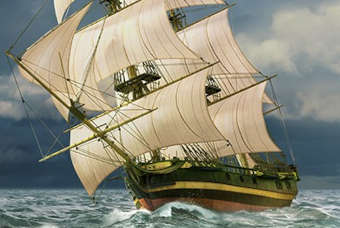 The Search for
Pirate Gold

This article was written by Mara Grunbaum for Scholastic SuperScience magazine.