Peek inside one of America’s last pencil factories

Since my first day of kindergarten (almost 20 years ago!), I’ve been writing with a pencil. But I had never thought about how they are made. (Have you?) That changed when I visited one of America’s last pencil factories, in Jersey City, New Jersey.

General Pencil Company was founded in 1889. It’s been making pencils for more than 100 years. General Pencil is the oldest pencil company in America. It’s also one of the last standing. Nearly all U.S. pencil companies have either gone out of business or they have closed their factories in the U.S.

The sights, smells, and sounds of the factory make it an exciting place to be. When I visited, machines were cranking out about 3,000 pencils an hour! “We love making pencils,” says Katie Weissenborn Vanoncini, president of General Pencil.

People have been using writing tools for thousands of years. More than 5,000 years ago, ancient people known as Mesopotamians invented the world’s first writing system. They created a writing tool called a stylus. (Fun fact: They were also the first to document the solving of math problems.)

After that, the ancient Egyptians, Greeks, and Romans all wrote with styluses too. Sometimes styluses were made with lead, which is why the idea that pencils contain lead remains today. They don’t. They contain graphite, a mixture of clay and black carbon.

In the mid-1500s, farmers in England used graphite to mark sheep. By the end of the century, people began placing sticks of graphite into wood sleeves. The pencil was born.

Most of the graphite for pencils came from England and Germany through the late 1800s. Edward Weissenborn (Vanoncini’s great-great-grandfather) learned how to make pencils in Germany during this time. He moved to America in 1854. He wanted to create the country’s first pencil factory.

Weissenborn opened his pencil factory in 1860. People really liked his work. Four members of President Abraham Lincoln’s cabinet complimented him on the quality of his pencils. Later, Weissenborn’s son started a new factory that became the home of General Pencil.

Inside General Pencil, thousands of pencils in dozens of colors are produced every hour.

Then machines bake the graphite core into a broad cylinder. It’s called a pencil cake, but you wouldn’t want it for your birthday. The cake is cut into small rods. These become the pencil cores.

Meanwhile, workers load flat pieces of wood into another machine. The factory uses cedar because it doesn’t splinter like other woods do. The machine carves grooves into the wood to fit the graphite cores. Another piece of wood is attached on top. The result? It’s called a pencil sandwich.

Finally, machines cut the pencil sandwich into individual pencils. Each is painted and then topped with a metal band and an eraser. Then they’re packed and shipped across the country.

The factory makes about 24,000 pencils a day—almost 9 million pencils a year! The fall is one of the company’s busiest times. “Lots of people want new pencils when they head back to school,” Vanoncini says.

Estimate how many pencils it would take to measure the height of each member of your family. Record their names and your estimates in a chart. Then use a pencil to measure them! Add their measurements to your chart. How close were your estimates to the actual measurements? Try this activity again with a shorter item of your choice, such as a paper clip or coin.

Learn all about how pencils are made.

After looking at the slideshow, think about how to make your favorite sandwich or snack. Then write your own “How-To” booklet! Describe and draw a picture for each step. Be sure to use linking words like first, then, next, and last. Share your booklet with a family member or friend and have them create your item by following your directions. If they can't make the item in the way you described, have a discussion about which steps you need to change and why.

Learn about the different types of lines you can draw with a pencil.

Choose at least three kinds of lines from the video and use them in a drawing or design of your own. Label each type of line you used. Then hang up your beautiful piece of artwork in your home. Show the video to a friend and challenge them to create their own drawing using three more lines from the video!

General Pencil Company uses many different machines to make pencils. Can you use simple machines to move a ball into a basket? Play the game above to find out! Here are some questions to think about while you play: 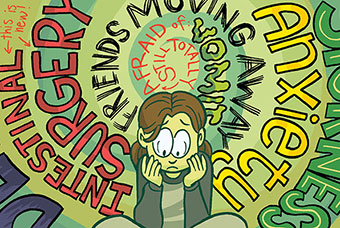 This article was written by Alexa Kurzius for DynaMath magazine.