Extra-thick fur helps mountain gorillas stay warm in the mountains where they live.

Hiking through a muddy forest looking for gorilla poop isn’t easy. But for biologist Winnie Eckardt, it’s part of the job. Eckardt studies mountain gorillas at the Karisoke (kar-ee-SOH-kee) Research Center in northern Rwanda. Eckardt and other scientists recently led teams that counted the animals by looking for their dung, or poop.

Researchers camped in the forest for weeks at a time to count the gorillas. To have enough water to drink,they went during the rainy season, when “it’s miserable out there,” says Eckardt. Mountain gorillas live only in the mountains between Rwanda, Uganda, and the Democratic Republic of the Congo.

In the 1990s, scientists declared mountain gorillas critically endangered. Illegal hunting and logging had left the animals at risk of dying out. Since then, people have been working to protect mountain gorillas and their habitat. Is the population growing? “We were hoping, but you never know until [you count],” says Eckardt.

Research center staff check on certain groups of mountain gorillas every day. The center is run by the Dian Fossey Gorilla Fund, which continues research started by Fossey in 1967. (See "Who Is Dian Fossey?" below.) The work is the longest-running study of gorillas in the world.

Some of the gorilla families are comfortable around people. But others run away as soon as they hear people nearby. So instead of trying to spot every gorilla, Eckardt’s teams look for signs that gorillas have moved through the forest. One clue: a path the big apes have cleared as they eat plants. Following these paths leads researchers to the temporary nests that gorillas sleep in each night.

When a team finds a nest, they check it for gorilla droppings. They collect the dung to analyze later in a lab. The dung contains DNA that scientists use to identify which gorilla it came from. That way they can make sure they aren’t counting the same gorilla twice.

Biologist Winnie Eckardt searches the forest for clues to track and count gorillas.

Between 2015 and 2016, Eckardt’s teams spent six months surveying the gorillas’ habitat. It took another two years to analyze the dung samples they had found. Finally, the results came in: They had identified 604 mountain gorillas, the most ever counted in the area!

“There’s strong evidence that the population is growing,” says Eckardt. That makes mountain gorillas the only great apes in the world whose numbers are actually going up. It’s also a good sign that conservation efforts are paying off.

Gorillas live in family groups called troops, which usually have 5 to 10 members.

But mountain gorillas still face risks, says Eckardt. Every year, her teams find and destroy hundreds of snares that poachers set to hunt animals such as antelope. Gorillas can also be killed or injured by these traps.

A changing climate could affect the gorillas’ mountain habitat too. That’s one reason why it’s important to keep studying and counting the great apes, says Eckardt.

“It just doesn’t get boring,” she says. “We always learn something new.”

Who is Dian Fossey?

Fossey begins her own long-term study of mountain gorillas. During the next 19 years, she records thousands of hours of observations about gorilla behavior in Volcanoes National Park in Rwanda.

Fossey is found murdered in her cabin at the research center. The case hasn’t been solved, but many believe she was killed by poachers.

The researchers you just read about track gorillas by counting their poop. Now it’s your time to be a researcher! Track how many times you take a drink in one day. Each time you drink, write down the time. Then analyze your data by answering these questions:

Three things you can do to help mountain gorillas.

Join the cause to save mountain gorillas and their habitat. Check out the slideshow above to see how you can help. Then choose an idea and take action!

Watch a video about the different types and characteristics of primates.

After watching the video, pretend you are a primate that can grab things with its feet. Choose five objects of different shapes and sizes, but nothing too heavy. Then try to pick each object up with your feet! Were you able to pick up all the objects? Were some objects easier to grab than others? Talk about what makes your hands different from your feet with a family member or friend. Then invite them to try this challenge. Who was able to pick up the most objects? 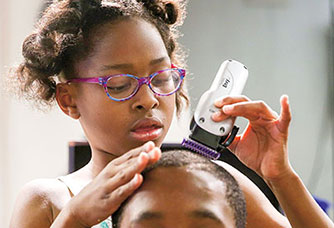 This article was written by  Mara Grunbaum for DynaMath magazine.