The story of an awful oil spill, 40,000 penguins, and the humans who saved their lives

These penguins are covered in oil.

Imagine you are an African penguin. The year is 2000. You live on an island in the South Atlantic Ocean. You are with thousands of other penguins on a rocky beach. Even though it’s June, it’s cold and windy. All around you are penguin noises: barks and honks. Some of your penguin friends fight for their space. Others cuddle with their partners and take care of their chicks.

You’re hungry, so you head down to the water’s edge. You waddle on tiny feet. Your wings are too stubby for flying. But in the water, you can swim faster and dive deeper than almost any bird on Earth. After you plunge into the sea, you shoot through the water, just a black-and-white blur. You snatch sardines near the surface. Your thick feathers protect you from the freezing water.

You stay in the sea for hours until your belly is full of sardines. Then you head back to shore.

That’s when something goes wrong.

As you come to the surface for air, the water feels strange. It is thick. It stings your eyes. You try to swim away, but now your wings are too heavy to lift. You can barely catch your breath.

What you don’t know is that just hours ago, a ship called Treasure hit a reef and split apart. As it sank, 1,300 tons of oil gushed into the sea. Thousands of penguins have been soaked with the poisonous oil.

The oil spill hit the world’s largest breeding ground for penguins. The warehouse that turned into a penguin rescue center was near Cape Town.

Oil does awful things to a penguin (or any bird). It makes your feathers separate. Now you are shivering because freezing water is hitting your sensitive skin. Your eyes hurt because the oil has burned them. Your wings are heavy because they are covered in oil.

But you want to survive. Somehow you struggle back to shore. You manage to stagger onto the beach and back to your nest. You lick your feathers, trying to clean them. Finally you give up. You stand there, terrified and silent.

The penguins wait for the rescuers to feed them. This pool can hold 100 penguins!

Workers use tiny brushes to clean oil from the penguins.

Then the beach is invaded by huge creatures.

They are humans, but you don’t know that. You have never seen a human before. These men and women know that this oil spill is terrible for you and your species. Some of the people have spent their lives helping birds like you. All they want to do is save your life.

As the humans swarm the beach, you become scared. A man catches you. You use your strong jaws and sharp beak to bite his arm. But the man doesn’t let go.

Now you bite his leg. The wound will leave a scar on the man for the rest of his life. But he seems to care more about you than about himself.

All across the beach, people are capturing penguins. The people are getting slapped by wings and bitten as they load penguins into crates. It is painful and tiring work. And it’s sad to see all of these scared and injured penguins. Some of the humans try not to cry. But they don’t give up. Thousands of penguins are in danger. And the workers want to save them all.

When wearing a sweater, a penguin can’t lick the deadly oil from its feathers.

Ten miles from the island, a team of workers and volunteers has turned a warehouse into a penguin rescue center. The warehouse has many separate areas to contain the penguins. In other areas, penguins will be washed. One room is filled with tons of frozen fish. It’s very hard to catch enough fish to feed all the penguins.

Actually, everything is hard. Just getting one penguin to eat is difficult. In the wild, penguins gobble up sardines while the fish are alive. Penguins don’t want dead fish. So workers have to hold the penguins, pull their beaks open, and shove the fish down their throats. Feeding all of them takes 15 hours.

And then there is the stinky smell that fills the warehouse. It comes from penguin droppings, dead sardines, and human sweat. Many people throw up when they first arrive. But not even the smell keeps people away.

Thousands of volunteers come to the warehouse. They include rich women from fancy neighborhoods and poor teenagers from city streets. Some have never even owned a pet. But all of them want to save the penguins.

An African penguin is once again clean and happy.

Weeks go by. Then one day, you are put into a box. You feel yourself being moved. When the box is opened, you are on a strange beach. You stand there for a bit. Then you can’t help yourself. You run toward the water and dive in. You follow a mysterious signal buried deep inside your memory. This is called instinct. You swim until you get to the shores of a rocky island. Your island!

While you were gone, humans cleaned up the oil that had covered the beach. The ocean carried the rest away.

Soon, thousands of penguins arrive on the island. Once again, sounds of honks and barks fill the air. You’ve been part of the greatest animal rescue in history. Nearly 40,000 penguins were saved. Many of them will pair up with mates. Baby penguins will be born.

You don’t know any of this because you are a penguin.

All you know is that your world is once again the way it should be.

This story is written from the point of view of an African penguin. Think about the penguin’s experience on the day of the oil spill. Then close your eyes and imagine you are a penguin. What did you feel, see, and hear on that tragic day? Write a journal entry about your experience. Then share it with a family member or friend. Were they able to guess that the journal entry was written by a penguin? How?

Imagine that the story you just read has been turned into a book—and you’ve been asked to design its cover! Book covers aim to catch a reader’s attention. What pictures or illustrations will you put on your cover? What colors will you use? How will you write the title? Make a list of what you want your book cover to include. Then create your eye-catching design! Show your cover to a family member or a friend and ask them if they would want to read the book.

Can you remove oil from a bowl of water?

Oil spills in the ocean are tricky to clean up. Some materials are better than others at removing oil from water. Check out the slideshow above for an investigation of what it’s like to clean up an oil spill!

Pretend that you are holding a press conference about the penguin rescue. A press conference is an event where a person makes an important announcement to journalists, who then ask questions. What information will you need to share? What questions might journalists ask? Write down notes about how the penguins were harmed and how people helped them. Then invite your family members to act as journalists and ask questions. Set up chairs for them and a place for you to stand to deliver your announcement. 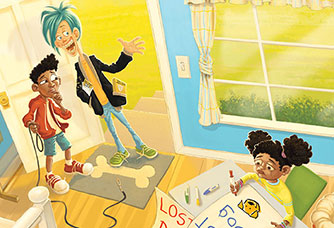 Fiction: The Case
of the Missing
Dog