The delicious true story behind a fast-food favorite

Hamburgers were under attack!

For years, Americans had been in love with burgers. And few companies sold more burgers than McDonald’s. But in 1977, the U.S. government warned Americans that eating too many beef burgers was unhealthy. Eat chicken instead, experts said.

The company had grown rich by offering tasty fast-food burgers at a bargain price. How could they make Americans fall in love with chicken the way they had with burgers?

Before the mid-1900s, chickens were hard to prepare. People ate them only as a special treat.

But it wasn’t McDonald’s that first invented the nugget. That honor goes to a scientist known as America’s chicken genius: Robert Baker. In the 1950s and ’60s, Baker was working with farmers and chicken companies. His mission? To convince Americans to eat more chicken.

Until the mid-1900s, chicken had been a fancy food that people ate only for special occasions and Sunday dinners. Getting a bird on the table was a small battle. First, you had to raise one in your backyard or buy one at the market—often still alive and squawking. Then you had to kill the poor creature, drain its blood (yikes), scoop out its insides (double yikes), and pluck out its feathers in sticky clumps (ewww).

By the 1950s, cooks could skip this feathery mess: Plucked chickens were now available at grocery stores, cleaned and ready to cook. Yet even then, they took time to prepare. Back then, easy-to-cook foods like burgers, hot dogs, and fish sticks were popular. Few people wanted to wrestle a slimy bird into the oven and wait two hours for it to roast.

Baker had to make chicken easier to cook and eat. But how?

The Nugget Is Born

But Baker was especially proud of the chicken stick: a bite-size chunk of ground chicken coated with golden-brown batter. It had taken hours of experimenting to come up with a recipe that wouldn’t crumble apart when fried. No one had ever seen anything like it before. And just like that, the original nugget was born.

Baker and his team called their invention the “Chicken Crispie.” They published the recipe for anyone to copy for free. Yet this chicken masterpiece didn’t catch on—until nearly 20 years later, when McDonald’s was facing its big hamburger crisis.

After the U.S. government put out its burger warning, leaders at McDonald’s knew they had to come up with a new menu item—and fast.

But wait: What about chicken nuggets?

Right away, McDonald’s leaders knew nuggets were a winning idea. Luckily for them, the company had Baker’s Chicken Crispie recipe from years earlier to help them craft the perfect nugget.

In 1983, Chicken McNuggets launched in McDonald’s restaurants across the country. They were an instant hit. Diners who had given up burgers fell in love with this crispy creation. Later, experts would learn that these deep-fried nuggets were no healthier than burgers. But by then, it was too late—the nugget had already become an American classic.

Baker never made money off his most famous invention. But he achieved his goal: America turned into a nation of chicken eaters. Today, we gobble up more than 2.3 billion orders of chicken nuggets each year. And they aren’t just a fast-food item. They’re everywhere—cafeterias, kids’ menus, the grocery store.

So the next time you bite into a chicken nugget—or a tofu nugget—you can think of Baker.

Robert Baker spent years tinkering with different creations to try to get people to eat more chicken. What food creation would you like to invent? Use these questions to help you get started: Why should people eat your food? What is it made of? Does your food help solve a problem? Is it easier to prepare than what’s already available? Draw your creation and label its parts. Then write a short paragraph that explains why your new food will be the next big hit!

Watch a video to learn more about understanding nutritional labels.

After watching the video, look at the nutrition label for a food you like. Answer the questions below and then share what you learned with a family member or friend. 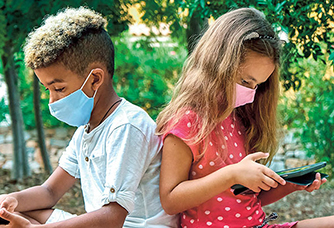 Is Technology
Hurting Your
Friendship?

This article was written by Allison Friedman for Storyworks magazine.