A young rodeo star honors the history of Black cowboys.

The gate flew open and Savannah Roberts took off. Perched on her horse, Short Shank, Savannah could hear the roar of the crowd. The 12-year-old and her horse raced at top speed, whipping around barrels.

No other rider could match her speed. Savannah, the youngest person in the competition, won the barrel racing event at the Bill Pickett Championship Rodeo last September. The rodeo celebrates and honors African American cowboys and cowgirls.

“Winning at this rodeo made me feel really special and proud,” says Savannah.

Before rodeos, cowboys lived and worked in the western U.S. In the mid-1800s, many people there owned cattle ranches. But they didn’t have fences to keep their steers and cows close to home. So they hired cowboys to ride around on horseback to keep their cattle from roaming off.

Cowboys also guided huge herds of cattle along rugged trails to be sold in other parts of the country. These cattle drives involved moving hundreds of animals at a time.

“It was hard, dangerous work, and you worked for low pay,” explains historian Michael Searles.

Cowboys faced risks, like herding cattle across rivers. If the cowboys weren’t careful, they and the animals could drown. And they were constantly on the lookout for cattle thieves.

Cowboys played a big role in settling the rough, open territory known as the Wild West. The Chisholm Trail was one famous cowboy trail. Where did it begin and end?

While books and movies often show only white cowboys, about one out of every four cowboys were Black. Many had once been enslaved but were freed after the Civil War ended in 1865. Black cowboys faced discrimination from ranchers and fellow cowboys. They were often given the hardest jobs, like breaking in horses or crossing the deepest parts of streams during cattle drives.

“Black cowboys faced racism because some white cowboys didn’t want them on their ranches,” says Searles.

Still, many of these men saw working on the trails as a chance at a new life.

By the 1880s, barbed wire fences made it easier to control cattle. Fewer cowboys were needed, but a new era was beginning. Cowboys started showing off their skills in events called rodeos. They’d ride horses, perform tricks, and rope steers.

Bill Pickett was one of the first—and most famous—rodeo stars. Today, the Bill Pickett Rodeo keeps the history of Black cowboys alive. It reminds people how important Pickett and other Black cowboys were in shaping our country. Savannah honors the cowboy tradition by inspiring the next generation of cowboys and cowgirls.

“I love encouraging other kids and showing them it’s possible to do what I do,” she says.

What Savannah Wants You to Know

I grew up around horses and have been competing in rodeos since I was 5 years old. It’s challenging and takes a lot of practice, but it’s also rewarding.

I hope to be the first female African American national rodeo champ. There aren’t a lot of Black cowgirls where I live, in Colorado. It makes me stand out—in a good way.

You should never judge a book by its cover. People sometimes underestimate me because I’m young and my horse is smaller than the others. But we’re superfast!

My horse is like a member of my family. Short Shank and I make a great team. No matter what, I know that my horse is always going to race his heart out for me.

Traditions are an important part of keeping the past alive. Make a list of your favorite family traditions. Then talk to your family about when each started, and why each one is important to your family.

Watch the video “Nat Love: African American Cowboy.” Then imagine you’re a talk show host about to interview Nat Love. Make a list of games or activities, like tying a lasso or rope tricks, that you would ask him to perform on your show. Then prepare a list of five interesting questions you would ask. When planning your questions, keep these tips in mind:

Pretend you’re in a rodeo with this rodeo-inspired game.

Now you be the cowboy or cowgirl! Make up a rodeo-themed dance that includes moves inspired by riding horses and performing tricks like roping steers. Or play a rodeo game with a friend or family member! Check out the slideshow above to learn about a rodeo event called barrel racing and how you can try it out at home. 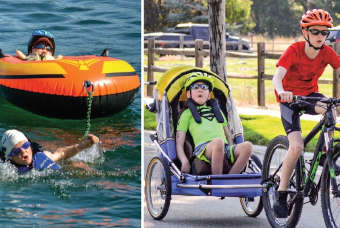 This article was written by Tricia Culligan for Scholastic News 4 magazine.