Jack weaves through a forest in Washington State, his nose to the ground. The 6-year-old Australian cattle dog mix has caught a whiff of something intriguing. He’s determined to follow the scent trail to its source.

Jack isn’t sniffing in the forest for fun. He’s a detection dog for Rogue Detection Teams. That conservation agency trains dogs to locate traces of wild animals for scientists to study. Often this means sniffing out their scat, or droppings.

“I can tell when Jack picks up a scent,” says Collette Yee. She’s Jack’s handler and a research scientist with Rogue Detection Teams. “His mouth tightens, his nostrils twitch, and his tail starts to wag like crazy.”

The samples the dogs find give scientists important information. Substances in the droppings provide clues about the diet and health of the wild animal they came from. If scientists discover problems affecting the animals, they can take action to help them.

How a Dog Uses Its Nose

A dog’s sense of smell works the same way a human’s does. The difference is that a dog’s nose is much more sensitive. Here’s how it works.

Think: How might a strong sense of smell have helped dogs’ wild ancestors survive?

Dogs excel at all kinds of detective work because they are superior sniffers (see Lifesaving Sniffers). Their sense of smell is 10,000 times more sensitive than a human’s. That allows them to sniff out faraway odors that humans can’t smell at all, like tiny bits of animal scat.

Droppings give off odor molecules, tiny particles that carry scents through the air. When a dog sniffs, cells inside its nose called scent receptors capture these molecules and send signals to the brain. The brain then determines what the smell is from (see How a Dog Uses Its Nose).

Your nose works the same way. But dog noses have at least 50 times more receptor cells than human noses do, says biologist Pascale Quignon. That allows dogs to smell very faint scents—like the slime trail left behind by a snail.

Scientist and trainer Collette Yee picks up an animal sample found by her dog, Jack.

The dogs that work for Rogue Detection Teams are rescue dogs that once lived in shelters. To teach the dogs how to find certain scat samples, trainers present them with droppings from different species. They hide the samples in boxes with holes. When the dogs sniff the hole that covers the target scat, they get a ball. That teaches the dogs that finding that specific sample earns them a reward.

“They quickly figure out that they have to find exactly the kind of sample we want in order to play,” says Yee. Eventually, the training moves outdoors, where there are many more distractions.

Handlers train dogs by asking them to sniff out scat hidden inside special boxes with holes.

Recently, Jack was part of a study to learn if detection dogs are more accurate than humans at finding baby birds and bats that have died. The animals’ tiny bodies are often hidden in cracks in the ground or covered by leaves. The humans in the study found only 30 percent of the birds and bats. Jack sniffed out more than 90 percent.

Not all dogs are cut out for the job. “We need dogs that are really energetic and completely obsessed with balls,” says Yee. “It’s basically a game for them.”

When dogs find a target scent, they are rewarded with a ball.

The Smell of Success

Jack has been working as a detection dog for four years. He can identify the smells of more than a dozen different species. His work is helping scientists monitor endangered animals, from bats to gray wolves.

Based on the number of droppings Jack finds, scientists can estimate the size of a species’ population. Bits of prey in the droppings can tell scientists what the animals are eating. Hormones and other chemicals can indicate if the animals are pregnant or if they have toxic substances in their bodies.

Dogs can even sniff out orca poop floating on the ocean!

Recently, Jack has been working with Yee to locate orca scat off the coast of Washington. The snot-like substance floats on the water’s surface. For a human, it’s not easy to see. But from a boat, Jack can catch the scent of the oily droppings from more than 500 meters (1,640 feet) away! Researchers from the University of Washington are studying the scat to find out why orca numbers are shrinking.

Rogue Detection Teams is working with scientists to come up with new ways to put the dogs’ sniffing skills to use. For instance, some dogs are learning to find trees with certain diseases. “So far, there don’t seem to be limits to what these dogs can do,” says Yee.

Rogue Detection dogs aren’t the only canines using their noses to help others. Here are two ways that dogs use their amazing sense of smell to save people from harm.

After an earthquake, a flood, or a fire, search-and-rescue dogs can find humans hidden under debris by following their scent.

Medical alert dogs can smell tiny changes in body chemistry that signal when a dangerous condition, like low blood sugar, is about to happen.

Think: Can you think of another way that dogs could use their sense of smell to help humans?

Watch a video about working dogs that are trained to help people.

After watching the video, think about another job that dogs could have. Why is this job important? How would you train a dog to do that job? Make a drawing that shows the dog at work. Then write step-by-step instructions that describe how you would train the dog to perform its job.

Use your nose to identify different scents.

Is your sense of smell as strong as a dog’s? Here’s your chance to be a scent detective! Check out the slideshow above to see if your nose knows.

What would life be like from a dog’s perspective, or point of view? Try it out! Walk around on your hands and knees for 5 to 10 minutes. Think about the following as you move around: 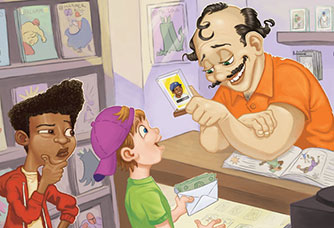 The Case of the
Fishy Baseball
Card

This article was written by Hailee Romain for SuperScience magazine.