Earth is home to a huge variety of animals, from giant rhinos to tiny winged insects. But more than 8,000 species are endangered and could become extinct. Unfortunately, humans are their biggest problem. People hunt animals for food and body parts and destroy their habitats to build roads, farms, and homes.

The good news is many people are also trying to help animals. They’re moving them to protected areas, breeding them, and bringing back their habitats. Read on to meet five animals that people have rescued from almost dying out. With a little help from humans, these endangered populations have bounced back.

The scars on this manatee were caused by a spinning boat propeller.

These days, when boaters enter Kings Bay in western Florida, they have to reduce their speed. Slowing down makes them less likely to hit a manatee. These pudgy marine mammals swim in coastal waters around the southeastern U.S. Hunting manatees was outlawed in the 1890s. Still, by the 1970s, there were fewer than 800 left.

Boats were a big part of the problem. Their spinning propellers can injure or kill a slow-moving manatee. But new speed limits in the waters where manatees gather have helped the animals avoid collisions, says Jim Valade of the U.S. Fish and Wildlife Service. The most recent count found more than 8,800 Florida manatees!

This red-speckled moth, called the New Forest burnet, once fluttered around several areas of Great Britain. But over decades, people built cities and roads on their habitat. Many were also plucked from the wild by insect collectors. By the late 1980s, British scientists feared the moths were gone.

Then researchers found 12 New Forest burnets in a patch of grass along a seaside cliff. They were the last of their kind known to exist on the island of Great Britain. The moths lay eggs in tall grass. But sheep had eaten the grass near the cliff, making it hard for them to reproduce.

After the moths were found, scientists built a fence to keep the sheep out. As the grass grew, the moth population swelled to the thousands.

This blue iguana hatchling was born thanks to a breeding program in Grand Cayman.

Blue iguanas live in just one place: the island of Grand Cayman in the Caribbean. Over the past several decades, people paved over much of their habitat. They also brought pet cats and dogs, which hunt the reptiles. Blue iguana numbers plummeted.

So in 1990, scientists with the Blue Iguana Recovery Program began capturing wild iguanas and breeding them in captivity. They kept the iguanas’ eggs warm to help them hatch. Scientists raised the babies until they were mature. Then they released the iguanas into protected parts of the island.

Biologist Bryan Watts prepares to release a bald eagle fitted with a tracking device into the wild.

Bald eagles are the national symbol of the United States. But in the 1960s, they nearly became extinct across much of the country. The main culprit was DDT, a chemical that farmers used to kill pests on crops. When eagles ate animals that had eaten DDT, the chemical weakened their eggshells. As a result, their chicks didn’t survive.

“The population was in free fall,” says Bryan Watts, a bird biologist in Virginia. In 1963, only 487 eagle pairs were nesting in the continental U.S. After DDT was banned in 1972, bald eagles slowly started to recover. Now, scientists think more than 10,000 pairs nest in trees from California to Florida to Maine.

Workers prepare to transport this rhino after removing its horn to keep it safe.

Southern white rhinos live in southern Africa. But by the early 1900s, people had killed all but about 100 of them. Hunting them is now illegal, but poachers still kill rhinos for their horns, which are used in some traditional medicines. The closer rhinos live to people, the more at risk they are.

That’s why 60 years ago, conservation groups began moving the animals to remote and protected areas in countries like Botswana and Zambia. Often, scientists first remove the rhinos’ horns to prevent them from being targeted by poachers. They use medicine to calm the rhinos before transporting them by helicopter or truck.

Thanks to these efforts, there are 18,000 of the animals today. They are the only rhino species not at risk of extinction.

Use your tree-planting powers to survive habitat loss.

Many animals around the world are losing their habitat. One of them is the golden lion tamarin, a monkey found only in Brazil. Play the game above to pretend you’re a tamarin fighting against people chopping down your forest. Can you plant enough trees to stay alive? When you’re done playing, answer this question: How did losing large numbers of trees affect your ability to survive in the forest?

Schools and sports teams often use animals for their team names and matching mascots. (Mascots are characters that represent the school or team. They’re meant to bring good luck.) Mascots usually have a memorable look and nickname, like Freddie Falcon or Hugo the Hornet. Which comeback creature would you use as a mascot? What would it look like? What would it wear? What would its name be? Remember: Thousands of fans could be shouting its name, so make it fun to say! Then draw a colorful picture of your mascot.

Think about what problems wildlife may face in your community. What can you do to help? Take a walk in your neighborhood with a trusted adult. Discuss these questions while you walk: 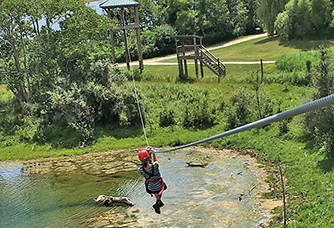 This article was written by Mara Grunbaum for SuperScience magazine.